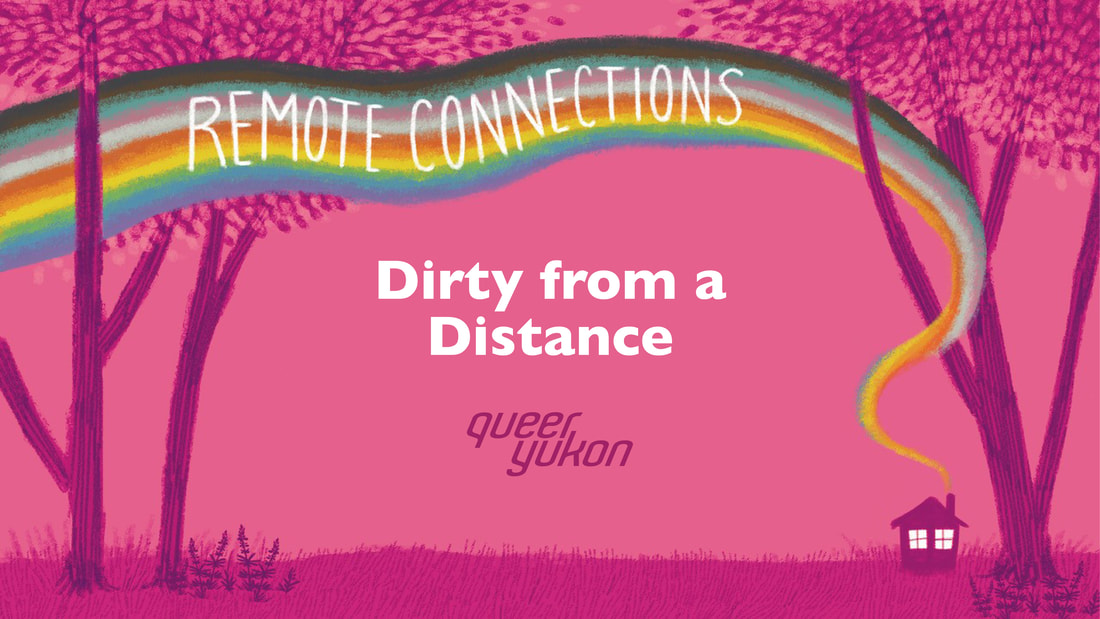 Dirty from a Distance

Fri. Aug. 7 @ 8pm
Online Video | 19+ | By Donation
Join us for this sizzling showcase of tantalizing cross-Canadian talent celebrating identity and diversity through the art of burlesque and drag. Learn more about the performers below!

HOW TO WATCH
Make a donation through our Eventbrite link below to be placed on our VIP Guest List! Once the show goes live on Fri. Aug. 7 @ 8pm we will email you a link to the performance! Make sure to watch the video before the video expires on Sun. Aug. 9 @ 11:59pm.
Get Tickets Here
​COST
Half of the donations will go towards Queer Yukon’s QTBIPOC Community Fund and the other half will be divided evenly amongst the performers as tips! All performers will be paid a fair honoraria to be part of this event.

Queer Yukon believes that cost should not be a barrier to participation in the community. If you would like to participate in this event but feel that financial considerations are a barrier, or if you have any other questions, please contact us at: pride@queeryukon.com.

Watch the teaser below...

​HOST
Sparkle Plenty
(Facebook / Instagram)
Sparkle Plenty is Vancouver's glamedian, weirdlesquer, and word-maker-upper who has been delivering beautifully bizarre burlesque acts for over 10 years! This fiery goddess is Cree with mixed heritage and is a proud sister of the first-ever all Indigenous burlesque group, Virago Nation. You can find her teasing and emceeing on stages all over Vancouver, Toronto, Las Vegas, and more. Sparkle has been invited as a featured performer in burlesque festivals in Vancouver, Calgary, and Edmonton as well as queer and Indigenous arts festivals throughout the city.

Jolene Queen
(Instagram)
​Jolene Queen Sloan, 23 and the drag persona of Prianshu, comes with her own tagline: “Jolene Queen Sloan: One look and your mind is blown”. Inspired by the spiciness and flavours from Bollywood, no surprise that Jolene is all about gorgeous dance and beautiful style. When homosexuality was illegal in India, Jolene performed her drag on various Indian platforms. Jolene presents herself as a very fierce and powerful drag queen who supports women's empowerment and BLACK LIVES MATTER. The Yukon was lucky enough to see her dazzle during the 2020 Rendezvous Festival and for this Pride Week, Jolene is ready to mesmerize and entertain the public with her one-of-a-kind style. So Yukoners, get ready to see Jolene's Charisma, Uniqueness, Nerve, and Talent!

Chérie Coquette
(Website / Facebook / Instagram / Twitter)
Chérie is a French word for your significant-other. That means that you are already intimate with her by saying her name. Please don't be fooled by the look; she just might surprise you… Born in Québec, Chérie Coquette found her home in the far north wilderness of the Yukon. Trained in contemporary dance, she is a leading figure in Whitehorse's burlesque scene. Before the age of quarantine, she performed at the Montréal Burlesque Festival, Capital Burlesque Expo in Ottawa and Nelson, British Columbia with Candian Legend Judith Stein, and was recently part of the Vermont Burlesque Festival earlier this year.  Be ready for a treat, a laugh, and an explosion of passion!

Mixence Gold
This performance is the birth of Mixence Gold. He starts his journey from the joys of coming out to an exploration of his expression and body. A handsome entity with fire hip movements, Mixence is back with his original mash-up of folklore and pop dancing. You may mistake him for Lenny or Prince but do believe that he is both -- and everything -- in between. Mirrors and barbies never looked more sexy.

Gin St. Syn
(Instagram / Etsy)
Ambitious and cheeky, Gin St. Syn is ready to show you their pretty pink fantasy and make a virtual splash! Gin seduced their way into people's hearts and pocketbooks as a stripper and pole dancer for five years, as well as co-owning the femme-run Pink Champagne Girls, before taking a step back from the stage in 2016. Now this gem of a femme is ready to tease their way out of retirement for their debut as a queer, non-binary, autistic performer.

Arctic Rose
The North is magic and so is she. Of Inuvialuit and Gwich’in decent, her ancestors woke her to spread beauty in the world. Much more than a pretty face, Arctic Rose is a healer, business owner, and force within her own right. Described as bubbly, always down for a good time, and passionate -- never get on her dark side. Everyone wants a spiritual woman until she’s pissed off... Now she’s a witch and you're scared!

Beat Trix
Beat Trix is a representative from the year 3020 when Indigiqueer femmes have seized the means of production and run an egalitarian society where bigotry is punishable by death. Rumoured to be the descendant of the 20th century’s Caitlin Beaulieu who was part of the Plains Cree nation.

LMNO
I hope you know your ABCs!  Spilling right out of the alphabet soup, LMNO has been bringing the heat to the Vancouver Drag scene, spicing up the King menu, and delivering delicious all-you-can-eat genderfuckery. A settler serving face on the unceded traditional land of the Coast Salish Nations, this saucy dish likes to give the audience a run for their money by stirring in a dash of humour, a pinch of politics, and a grain of salt to the traditional drag recipe. Putting the flambé in flamboyant, LMNO is always hot n’ ready for you.

Beau Ryder
Beau Ryder is a queer Dene, tender and rough, working to fuck some shit up and ground some feelings.
​
Deels Villainess
Deels Villainess was born Gwich’in in Inuvik, NWT and raised on the Tr’ondek Hwech’in, the Traditional Territory in Dawson City, Yukon. She is a proud mom of her 8-year-old daughter, Trinity, who shares her passion for acting. Deels works for the TH Government supporting the TH community, especially during this pandemic period. In her free time, she loves to perform, from acting on stage at The Palace Grand Theatre to virtual play readings with Gwaandak Theatre. When she was asked to "kitten" as a bisexual '80s nerd for Dawson City's Boardwalk Burlesque last Halloween, her love affair with burlesque began. Gwaandak Theatre gave her first opportunity to perform burlesque in Indigi/Queer Cabaret at the First Awakens Festival.

CODE OF CONDUCT
Queer Yukon Society (QYS) is committed to fostering harassment-free community spaces where all employees, volunteers, and community members are treated with respect and dignity.

QYS recognizes and values diversity. We strive towards creating spaces that support, promote, and celebrate the beautiful and complex identities within our communities.

QYS acknowledges that we have more to learn and that no space is completely “safe”. We know that we have work to do to build capacity within our board and staff to recognize discriminating and threatening behaviours, especially towards identities that we do not personally hold. Our vision is a strong and vibrant LGBTQ2S+ community in Yukon.

QYS has a zero tolerance policy for any form of discrimination, violence or harassment based on (but not limited to):

If you experience and/or witness discrimination and/or harassment in a QYS community space (online or in-person), Queer Yukon Society encourages you to reach out to the event organizer as soon as you feel safe to do so, or to contact us at: info@queeryukon.com.

To file an anonymous complaint or to read more about our Community Member Code of Conduct and our Online Moderation Policy, please visit: https://www.queeryukon.com/community-standards.html
Facebook Event